I still own a few shares of GOOG. It’s felt overpriced recently, but I’m holding onto a minimal amount at all times and trying to add more over time. So I’m hoping the price drops a bunch so I can pick up more cheaply.

Do a search here for GOOG for my previous thoughts (years old), but I basically think that the world will continue to be drowned in data. Google’s goal to organize the world’s information and their expertise at scaling Internet apps puts them in a great position to be a contender in just about any future technology. 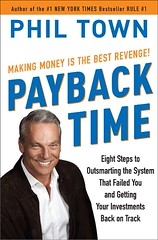 Anyway, I’ve recently read Phil Town’s new book Payback Time. The title there, like most investing books lately, takes advantage of the recent drop in the stock market to entice readers. However the content and tone of the book isn’t as whiny as you might think, and is generally applicable to investors in all markets.

We were big fans of the first Phil Town book, Rule #1, mostly because it described things in layman’s terms and gave readers a clear method for putting the books theories into practice.

Payback Time works the same way and repeats a lot of the ideas in Rule #1. There are still the 4 M’s (Meaning, Moat, Margin of Safety, and Management) for example, but instead of using technical analysis (in the form of Rule #1’s red/green arrows) Payback Time recommends a form of dollar cost averaging, Town calls “stock piling”.

Of course, Town has a section in the book titled “Why This Isn’t Dollar Cost Averaging” that I’ll try to summarize here. Town says (emphasis his), “DCA means investing a fixed dollar amount at fixed intervals no matter what the price of a given stock.” He then goes on to list the numerous flaws and criticisms of dollar cost averaging.

For further reading, Christian writes why you should consider “Averaging Down“, and here Steve “The Undertrader” describes his stockpiling-like investing style.)

I’ll buy that. And I like this a little better than using “the tools” or “the arrows” or technical analysis to judge a stock because it’s one less thing to calculate. If you are calculating a “sticker price” and MOS price anyway, might as well use them to trade. If you thought of stocks as commodities or discounted dollars, this kind of trading would make even more sense. I value $1 at $1. If the market is pricing it at $0.80, I buy. If the market is calculating it at $1.10, I sell. Sure I could have waited for the price to drop to $0.70 before buying, or $1.20 before selling. I would have made a better trade, but I’m always making a winning trade if I buy when the price is lower than what I value it at (plus my MOS) and sell when the price is higher than I value it at.

So the Payback Time strategy should be a little easier to follow than the technical analysis from Rule #1. Well, to a certain extent. Town introduces another calculation called “the payback time” (maybe that’s the true meaning of the title) to pretty much calculate the MOS from a different angle. And he brings technical analysis back in, talking about support and resistance levels. Here’s a good recent analysis from Hipegg on Google.

Alright, so that out of the way, let me share some of my calculations on Google stock (GOOG). I’m basically running through the Payback Time Spreadsheet found on the Payback Time website. It’s a handy tool.

Here I would want to do a large Google Moat analysis, but I’m lazy. So I’ll say hey, they have a huge margin and virtual monopoly in search. And while there stance is vulnerable (MSFT is gaining ground lately), this moat is fairly stable because (1) it takes a lot of knowledge and investment to serve billions of searches a day quickly and (2) advertisers and publishers benefit from consolidation and drive the market towards one winner.

Charlie Munger and Warren Buffet at Berkshire Hathaway like Google’s moat. Not sure if they are investing. Buffet shies away from tech.

Here I would want to do a large Management analysis, but I’m lazy. I’ll say hey, these guys strive to do no evil. Page and Brin seem like great folks who are in it for the long term. They are standing up to China vs. going for short term profits. They don’t fudge their numbers (other than tweaking the Adsense lever). They don’t mess around with finance gimmicks like splits, etc. They are smart and clearly have a better understanding of the future than the average C-Level exec.

Nice all around. You usually want to go as far back as you can on these numbers. We can’t go much further back than 5 years because Google only started trading in 2004. If you wanted to be more conservative, you could use more recent (last 2-3 years) numbers since Google basically went from nothing to a top 10 company in 2 years and since then has grown a little slower.

Nice again. BTW, you can get some of these numbers in chart and spreadsheet form at YCharts.

Google has no debt!

I hope this was informative. Feel free to pick apart my numbers. In particular, I am always interested in pondering what a company that grows at 14%+ for 10 years would look like in the future. I’ll do that in a future post.